What is the optimal orientation and tilt angle for solar panels ? 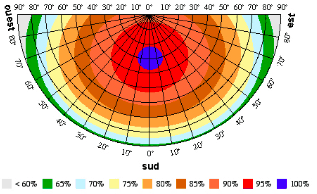 To best optimize the production of solar panels, do not underestimate the importance of their orientation and inclination! However, it’s not always about producing a maximum amount of energy; you also need to take into consideration your consumption needs. For instance, if you are self-consuming your electricity rather than selling it back to the grid, the optimal orientation is not necessarily the same!

Why is the tilt of the panels so important? 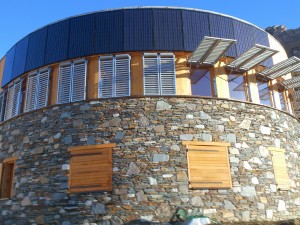 The tilt of the panels is important because your panels will produce a maximum of energy when the sun is directly perpendicular to them. During the winter in the northern hemisphere, for example, the sun is low in relation to the horizon. In this case, for the solar panels to get their best performance, a steep angle of 60° is best. During the spring the best angle is 45°, and during the summer when the sun is high in the sky, it’s best to have a low tilt at 20°!

What angle for solar panels should be chosen to maximize the production all year long?

In solar thermal energy : The aim is to produce more heat in the winter and less heat in the summer.  Example: In Marseille, for conventional thermal energy, 4m² of panels are necessary for a typical home’s hot water needs (200 L at 45 ° C) and the best inclination of the panels is between 50° and 55°. This inclination does not correspond to maximum sunshine, but because there is a surplus of production in the summer, it is better to optimize the angle for the winter.

Photovoltaic (PV): For photovoltaic panels where the electricity is re-injected into the grid for re-sale , the optimum orientation is south with an angle of a 37°, which maximizes total electricity production.

PV -T: With the DualSun PV- T panels, which produce both electricity and hot water, the optimal angle is the same as for PV panels.

Example: For a DualSun installation in Marseille, we recommend a 4-panel design for a family of 4. The best angle for that is maximum sunshine (37 °).

Some panels are installed on the façade of a building. Does this make sense?

What impact does the angle have on production as we diverge from the “ideal angle”? 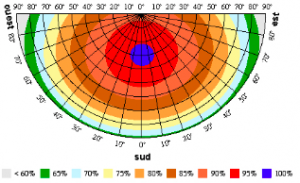 You can see on the graph above the variation of sunlight according to the orientation and tilt on a given surface. Note that the slope is important, but the orientation is essential as well!

Does it make sense to adapt the tilt of a roof to optimize production?

In the case of PV-T, when a roof has a fixed slope, it is not necessary to change the angle of the roof to get an optimal production. In fact, the production of energy will always be interesting (which is not necessarily true with thermal solar panels for heating).

Why is the orientation of the panels important?

On a fixed installation, what direction is best to have the best production?

South-facing roofs receive the most sunlight, and therefore the most solar energy during the day.

What will be the impact on production if it derives from this ideal orientation?

If you refer to the diagram above, you will see that further you are from the south, the more your production will be affected.

Does it ever make sense to have panels east/west facing rather than south-facing?

In the case of “self-consumption” for the PV production, it can make sense to orient the panels east/west rather than south-facing. East-facing panels will produce more energy in the morning, west-facing more energy in the late-afternoon. With respect to energy autonomy, the goal is not to produce the maximum but what is needed. This is, for example, the case for the off-grid Arpont chalet in the French Alps, where the DualSun panels are oriented east/west to be able to produce more energy in the morning and the evening and less during the day, when the shelter is pretty empty! The complete guide to the cleaning and maintenance of solar panels 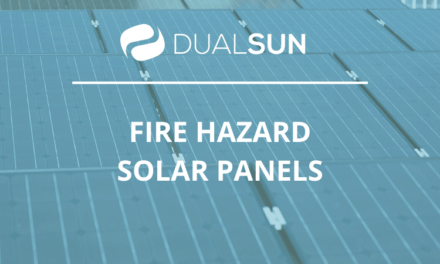